The Jerusalem Post - A chance to play ‘perfect music’

Jazz guitarist Dekel Bor and his trio perform Bach’s ‘Sonatas and Partitas’ – as is. 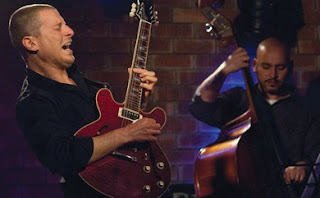 "I am prepared to die for every note I play, otherwise, I would have never performed it for the public,” says renowned Israeli-born jazz guitarist Dekel Bor, speaking about his new program. Starting from March 1 Bor, together with double bass player Assaf Hachimi and percussionist Rei Mohiach, will perform Bach’s Sonatas and Partitas at four Israelivenues, from Einav in Tel Aviv to Zappa in Jerusalem. Bor’s trio has already appeared with this program at two festivals, in Petah Tikva and Berlin.

“They were all sold out, without any promotion or publicity,” says Bor, looking rather surprised.

Bor, 31, catapulted to an impressive international career when, in his first week at the New School in New York, Reggie Workman – John Coltrane’s former bass player – invited him to join his ensemble. Since then, Bor has appeared with the elite of the international jazz world.

After moving to New York, Bor became a resident artist at such prestigious venues as Smalls, Birdland, The Blue Note and The 55 Bar. In addition, he has collaborated with the Orpheus Chamber Orchestra and the Israel Philharmonic Orchestra, as well as modern dance star David Parsons.

“Many of them were the heroes of my youth,” says Bor. “When I ask myself how I have reached these places, the only thing I can figure out is that I am just in love with the process of music making. I’ve been playing for my entire life, and there is hardly a day when I don’t touch my guitar.”

Bor’s career, which is centered mostly in the US with short jaunts to Europe and Israel, has two facets. “I play jazz standards as a guest artist, and I perform music of my own with my trio. We just rent a van and cruise the country. So one day we appear in front of 2,500 people at a huge festival, and the next day we play for 700 listeners in a small town in Wisconsin.”

But what does Bach have to do with all this? “It all started two years ago when the Collins Guitars company sent me an acoustic guitar as a gift for my 30th birthday,” Bor recounts. “It was an amazing $7,000 instrument with unlimited possibilities. And they wanted me to record something for them, probably a cover for some Beatles piece. Instead, I suggested playing a piece by Bach, and they came up with the idea of recording an entire disk.”

Bor says he was quite shocked: “Are they crazy? Jascha Heifetz and Henryk Szeryng recorded Sonatas and Partitasfor violin solo, and now Dekel Bor? Bach is the ultimate trial for a musician. My producer Robert Sadin, who works with such artists as Sting, also said that this is quite risky. But I didnot say no.”

He was still deliberating when Noam Feingold, the owner of the prestigious Zappa Club, said: “Sure, I want you to play an entire Bach evening.” And he suggested a few dates.

“I agreed because I really wanted to play Bach for two reasons. First, Bach as a composer crashed all conventions that were accepted in the music of his time, especially regarding rhythm, and rhythm is the most important thing about jazz. This is what attracted me.

Second, Bach is seen by many as a religious composer, which is not true. Only a small fraction of his output was written to be performed in a church. The only explanation I see is that his music is perfect, and we perceive perfection as something godly. Now tell me, how many opportunities do I have as a musician to perform perfect music?” Bach is not strange for Bor. Just the opposite. Born into the family of Alon Bor, the head of the percussion section of the Israel Philharmonic, Bor grew up on this music. “There wasn’t a day when my father didn’t play it.

Later, I got a book of well-used notes from him, with his own remarks within the music text. But I was in my teens then, and my natural reaction was just to put aside what my parent suggested.”

Dekel Bor returned to this notebook later, after relocating to New York. “I started reading melodies and playing them for myself,” he says.

But again, there is a big difference between playing musicwritten for a violin solo 300 years ago in your bedroom and going out with it to a public that has gotten used to 3,000- watt sound.

“I didn’t have to make any effort to internalize this music because it has always been a part of me. To express how I feel about Bach, my fingers have found their way to the strings by themselves. But to prepare it is a lot of work – so I went to the desert for two weeks to learn it by heart.”

Bor explains that he did not make any musical arrangements – he plays Bach’s pieces as they were composed.

“I never come out of Bach, and I never stop to improvise,controversial as it may sound. I believe that my mission as an artist is to listen to myself and to go with this to the end.”

Dekel Bor performs on March 1 at the Einav Center in TelAviv. On March 10 at Tarbuta in Yokneam. On March 28 at Zappa in Jerusalem. And on March 29 at Rappaport Hall in Haifa. All concerts begin at 8:30 p.m.